My experience with TFS Preview

January 11, 2012
I have been using the Team Foundation Services preview for a while now, and the least I can say is that I am impressed! The web interface has a nice Metro style design and gives a high quality experience overall.

By installing the KB2581206 hotfix I can also access my TFS account from Visual Studio, which is absolutely fantastic. I might even sound a bit fanatic by saying that it is like a dream come true... The server appears as a traditional Team Foundation Server in Visual Studio apart from the logon process (a Windows Live popup window). Read more and try it out yourself!

Besides playing around with the user interface I have actually tried to work a little seriously with the service as well. Partly by uploading my project the Cornball and developing against the TFS in Visual Studio. So far this experience is very positive and I have not found any issues or oddities at all, except that the environment is kind of slow. This whole thing also takes me one step further out in the world of clouds. Particularly the Cornball, since hardly anything of that is left on my computer.

Here is a snapshot of the start page in my Cornball project, which is very empty at the time... 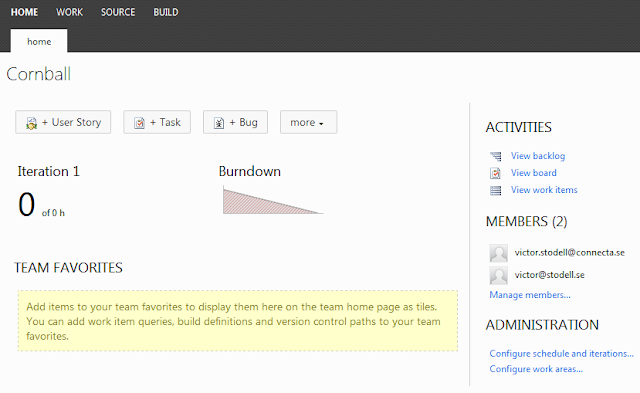